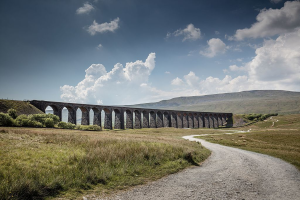 The Grade II Ribblehead viaduct structure has developed dangerous defects that are causing masonry to plunge off the edge, reports The Daily Mail, while new proposals include restitching the viaduct’s 24 arches, inserting anchors and repairing rainwater systems.

The iconic Ribblehead viaduct is at risk of collapsing unless major repairs are carried out amid increasing reports of falling rubble hitting people below.

The 145-year-old grade II structure has developed dangerous defects which are causing masonry to plunge off the edge.

Engineers have also discovered fractures along many of its 24 arches, which tower 100ft above ground, surrounded by the three peaks of Ingleborough, Whernside and Pen-y-ghent in the Yorkshire Dales.

On several occasions tourists walking below the 1,318ft-long bridge, part of the Settle-Carlisle line, have been hit by falling debris.

Network Rail has now applied for extensive repair work to be carried out on the historic attraction.

The application to the Yorkshire Dales National Park Authority reads: ‘It is clear that there will be a degree of intrusive works, most notably the concealed cintec anchors proposed.

The proposed stitching repair ‘is specified in order to prevent these large cracked masonry blocks shearing and falling onto the public below, which is something that has already happened at this structure recently’, it adds.

The application continued that the works are ‘considered to be in the best interests of the ongoing conservation of this historic structure’ and will help ‘preserve this iconic structure whilst ensuring the safe running of the Settle and Carlisle line and the safety of the public’.

Network Rail said minimising the risk to workers during repairs is a priority. Restitching masonry fractures, inserting anchors, reinforcing stone and repainting metalwork are included in the proposed plans.

The major tourist attraction has a ‘particular value… in terms of the visitors it brings to the area’, the application adds.

Construction began in late 1869, with more than 2,000 men who lived in shanty towns set up near its base.

The first stone was laid by William Henry Ashwell on 12 October 1870.

It was originally intended to have just 18 arches, though this was changed to 24 in December 1872.

By the end of 1874, the last stone of the structure had been laid and on 1 May 1876 the Settle-Carlise line was opened for passenger services.

During the 1980s, British Rail proposed closing the line. In 1989, after lobbying by the public against closure, it was announced that the line would be retained.

Since the 1980s, the viaduct has had multiple repairs and restorations and the lines relaid as a single track.

The land underneath and around the viaduct is a scheduled ancient monument and includes the remains of the construction camp and worker settlements.

The repairs are vital because the viaduct ‘tells the on-going story of generations of people’, the application states.

It was designed by John Sydney Crossley, regarded as one of the most significant and important railway architects of the Victorian era. He oversaw the engineering of the entire line before its official opening in 1875.

The construction was not beset without tragedy, however, and hundreds of workers died while building the line from a combination of accidents, fights and smallpox outbreaks. It caused such a loss of life that the railway paid for an expansion of the local graveyard.

Films which have featured the viaduct include No Blade of Grass in 1970, starring Nigel Davenport, and the 2012 British comedy Sightseers.

Its idyllic setting in the Dales means it is often a first choice for TV series and films, and a highlight of one of the UK’s most scenic rail journeys in the UK.

The 2,000 workers who built it lived in a shanty town in the valley below which was used as the inspiration for the ITV’s 2016 drama Jericho.

The viaduct was previously earmarked for closure in the 1980s because of a lack of passengers, but rail enthusiasts successfully campaigned to save it.

As well as being used for passenger journeys, many freight trains travel along the viaduct as they transfer thousands of tonnes of quarry product from road to rail to avoid congestion on the West Coast Main Line.

A spokesman added: ‘The interventions are consistent with the sympathetic ongoing maintenance of this structure.’