IHBC asks for: ‘YOUR PROSECUTIONS DATA PLEASE’… to help us help conservation! 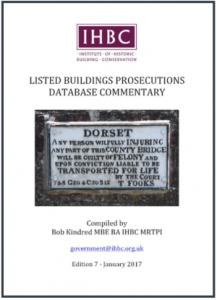 IHBC’s National Database of Listed Building Prosecutions – created in 1996 on the initiative of Bob Kindred, and now with details of hundreds of case sentences – is the ‘go to’ resource on local authority prosecutions, but its contents need continual updates, so IHBC members and networks are reminded that helping us populate the database helps conservation services do their job better.

Local authorities using these IHBC data resources tell us that prosecution cases were better served, and better placed in context, where our cumulative data was either known about or tapped.  Indeed the fines levied may have better reflected the seriousness of the offences as well.

Notifying the IHBC of prosecutions helps us maintain this central pillar of conservation regulation, while in collating the core data we can also obtain and input further feedback and details.  This is especially important when the fines levied are considered low in relation to the seriousness of the offence.

…possible that key council officers were unaware of the database…

We can often also establish whether the LPA’s legal officers and/or the courts were aware of the Database and/or the Historic England’s Heritage Crime Guidance for Sentencers (2017), which is especially important as the latter unfortunately does not cross-refer to the former.

However recently several case outcomes have been added to the IHBC’s Database from sources other than the local planning authority, as the Institute had not been notified direct.  It is possible that key council officers were unaware of the database, so we want to encourage all IHBC networks to raise awareness of the need  to alert myself, and the IHBC’s National Database of Listed Building Prosecutions, of any local developments.

Data, as far as possible in the format used in the on line resource, should be forwarded by e-mail to Bob Kindred at research@ihbc.org.uk